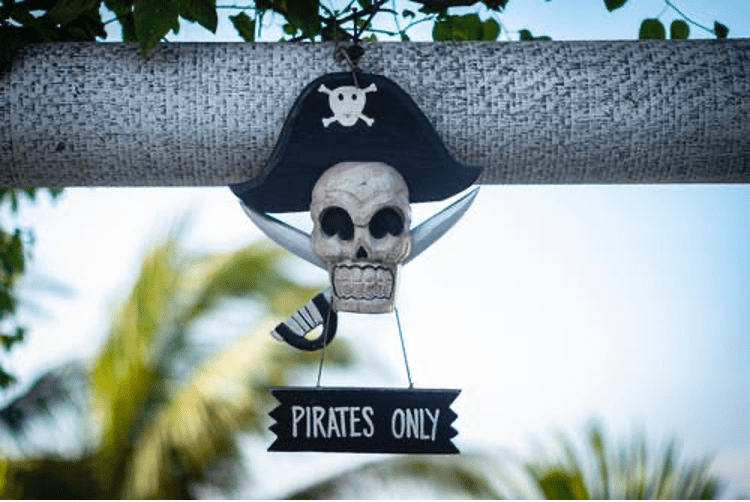 Imagine being stranded on an island, no phones, no gadgets…

Just you, and the land.

In this modern age, when phones, laptops, and consoles dominate our lives there’s little room to explore. To find treasure in unlikely places, real-life places, not virtual spaces on the internet…

It’s even harder for our kids to get a break from it all as they grew up around technology.

So, as parents it’s important that we give them a sense of adventure!

The kind of adventure they read about in Peter Pan, or they see in Pirates of the Caribbean…

So, get ready to set sail on a magical, pirate-themed birthday party that will transport your little ones to an alternate world of fantasy, freedom, and adventure…

Ready? Then, hop aboard, matey!

Get the Cabin Crew on Deck!

Of course, since it’s your child’s birthday party they’ll most likely be the captain…

But, that doesn’t mean that the crew aren’t just as important!

So, here are some creative ways to invite some friends on the pirate-themed adventure…

Depending on what you would prefer, there’s something extra special for everyone and the guests will absolutely LOVE this unique invitation!

Every pirate is on a mission to find the treasure.

In this case, the treasure comes in the form of FOOD!

But, why not make it a little hard for kids to earn their grub?

You can create a treasure map with hidden spots of treasure chests full of sweets, chocolate, and other indulgent treats…

The children will love running around the house looking for treats!

After a long voyage, and after treasure hunting, a cabin crew looks forward to a BIG feast on deck.

A pirate-themed party is the perfect occasion to have a massive birthday feast!

And, you definitely need a spectacular birthday cake to top it all off…

Check out this article for some magical, pirate-themed food to serve as this wonderful feast. You can also check out our article about kid’s party foods.

Decorate the Deck with Gold and Silver!

The best ships have the best decoration.

Your child deserves the BEST pirate ship! (In this case, BEST house covered in pirate decorations!)

So, gather all Yer gold and silver and kit the deck out with lots of decoration!

You can create a pirate backdrop for an Instagram wall, a barrel of pirate juice, and even a pretend pirate deck outside (if you have the garden space!) …

There are hundreds of pirate decorations online. To give you a place to start, check out this article by Fern and Maple.

Every birthday party needs some amazing activities to bring the theme to life, and what better way than to recreate that feeling of setting sail onto the open ocean than to dress up like a pirate?!

You can have a treasure chest full of pirate clothing from eye patches, to hooks and the children can choose what outfit they would like to dress up in…

Once they have the outfit sorted, they can move onto picking a super cool pirate name and write it on a personalised name tag!

6. Weapons at the Ready!

We all know pirates love to fight with swords, we’ve seen those movie scenes when they are standing on a ledge pointing their swords at each other…

So, a great activity for a pirate party is a sword fight! (Fake swords of course)

It’s a clever twist on the classic musical chairs game that we are all familiar with, but this time the chairs are different islands and each crew member has to successfully travel to each island.

However, if you are looking to take the party to the next level and hire a performer then we have you covered!

You can check out our incredible performers right directly through PartyWizz.

At the end of the party, when all the little pirates and cabin crew members have successful found the treasure chest, indulged in some delicious pirate grub, and had a blast playing pirate games they’ll be looking for a reward for all their hard work…

Why not create a special party bag of their collected treasure?

You can even get mini treasures chests for each guest!

If you’re wondering what to put in the party bag, then don’t worry, we have it covered…

They can take home the costume props, a pirate medal, or even some temporary pirate-themed tattoos!

For more ideas, take a look at this article my Mumsnet about how to plan a pirate-themed children’s party.

There’s no doubt with the right decoration, activities, and careful planning you will be able to conjure up a magical pirate-themed party that will leave the kids wanting to set sail and become arrrghh-wesome pirates!

We hope this has given you some inspiration for the ULTIMATE pirate party.

Happy hunting for treasure and remember to keep an eye on those little pirates!

At PartyWizz, our mission is all about helping people create fabulous parties with the minimum amount of time and stress.

We pride ourselves in working with the best entertainers in each category – magicians, face painters, balloon modellers, princess parties, arts and crafts and more.

What are Escape Rooms? – Everything you need to know

Fancy Dress Ideas For Every Month of the Year