Clowns Without Borders… is that a thing? 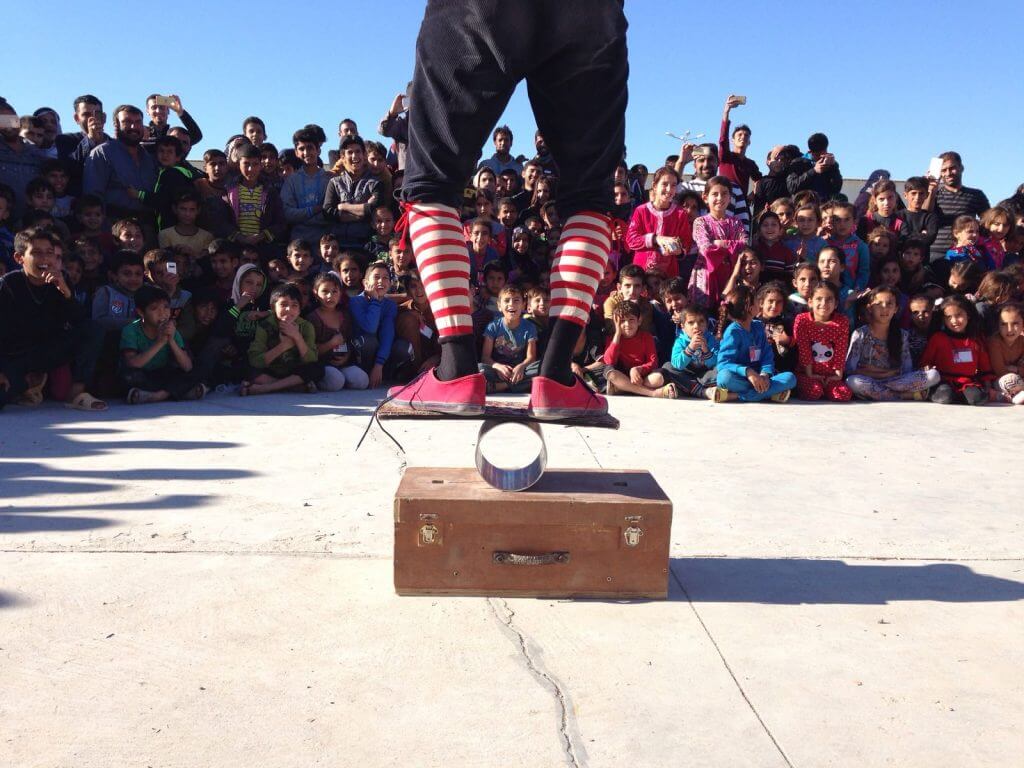 Clowns Without Borders is an international NGO that goes into war-torn regions, natural disaster areas and refugee camps to entertain families and children.

Every year, they operate projects in over 50 countries, entertaining 300,000 kids and their communities.

“No child left without a smile” – Their objective is to provide entertainment and humour as a means of psychological support to communities that have suffered trauma.

Currently, there are almost 26 million refugees around the world. This is the highest number the world has ever seen! Nearly half of these refugees are children.

With a number this large, it’s hard to rationalise each of these as individual humans.

Refugee camps are designed to be temporary settlements but unfortunately, their lifespan can extend to decades.

The living conditions for the children in these camps are dreadful. The camps are overcrowded, violence is omnipresence and there is a lack of sanitation systems. The children are also vulnerable to abuse and exploitation.

The health and phycological consequences of on the children is really profound. Refugee children are also extremely vulnerable to PTSD and “toxic stress. They may experience long-term pathological effects, due to “disrupted development time.”

A lot is being undertaken by different NGOs, governments and the United Nations to solve these problems. But the scale of the crisis makes it very hard to solve.

How Clown Without Borders Got Started

In 1993, child refugees of the Yugoslavia wars (1991-1995) wrote to Barcelona children saying: “You know what we miss most? We miss laughter, to have fun, to enjoy ourselves.”

In response, the children from Barcelona raised money for a clown to go and entertain them in the refugee camps.

Tortell Paltrona, a Catalonian entertainer, took up the offer and travelled to the refugee camps of Veli Joze. On the 26 of February 1993, the first show was performed.

After seeing the impact that they were able to produce, the entertainers realised that something needed to be done. From there, “Payasos Sin Fronteras” (Clown Without Borders) was officially born.

Every year, the organisation plans shows in over 40 countries around the globe and entertains thousands of kids.

You can learn more about Tortell Poltrona’s incredible journey in his interview with UNHCR.

Why Bring Clowns to War zones?

Entertainment is a key pillar of all of our lives and even more so for children.

In a previous article, we’ve outlined the importance of face to face entertainment and its importance for child development.

Research into laughter itself has linked it to numerous health benefits and stress reduction. It also helps people create meaningful human connections.

Molly Levine, a Clown Without Borders entertainer, explains this well in her TEDx talk.

For these reasons, Clowns Without Borders aims to bring laughter to those who need it the most.

Clowns Without Borders in Ireland

In Ireland, the clown without borders chapter was co-founded in 2007 by Colm O’Grady and Jonathan Gunning .

We asked Colm a series of questions about this experience with the NGO.

Tell us about your background

I originally come from Inchicore, Dublin, grew up in the 70’s and 80’s when the Ireland I knew was a very different place to today, though not unrecognisable.  My youth gave me an insight in the some of the suffering that we at Clowns Without Borders are trying to relieve at home and abroad.

I am a professional clown, circus performer, actor and director whose work is mainly international at present. I’m writing this from a circus tent in Berlin.  I’ve been performing now for well over 20 years, now I think I’m getting good at it!

How did you first get involved with CWB?

I was fortunate to be on the first CWB Ireland tour to Nepal in 2007, which was the conception of CWB.

I was asked by Jonathan Gunning and Sam Meyler to join them to play in refugee camps.

Little did we know what we were going to give birth to. Since then I have been passionate about this unique work.

What’s your current role and how long have you been doing it?

I am currently the director of CWB Ireland, I have been doing it since we founded the organisation in 2007, that’s a little while ago now.

It has been a real education, one that I doubt one could learn in a school.

Why do you enjoy being part of CWB?

I see the positive effect this approach has on people’s lives. My experiences through the years touch me profoundly, I have seen the transformative power of laughter in war zones.

I have witnessed children laughing for the first time in 6 months, their relatives amazed as they haven’t seen the child even smiling since witnessing the assassination of her father.

That kind of thing brings me to tears just writing it, and there are so many of those stories, helping to reach the lost child inside children and adults. Light in the darkness.

How big is the Irish Chapter of the organisation?

We have over 50 artists nationwide on our artists’ database. They come from all over the Island, north and south. We have currently 3 branches, one in Cork, one in Dublin and one in Galway.

In each branch, we have a dedicated core group and at HQ we have a small admin team who, with the board of directors, are trying to keep the laughter coming.

How many tours do you do a year and where do you go?

It varies; we do an average of 2-3 tours abroad every year, sometimes more.

In recent years we have been concentrating our energies mainly around the Syrian crisis, working with refugees who are fleeing to neighbouring countries such as Jordan, Lebanon, Iraq and most recently Greece.

We have been very fortunate to have the support of Culture Ireland to help us spread Irish humour, which as a nation we have an abundance of. I guess you could say we are sharing our countrie’s wealth.

Why do you think this organisation is so important?

From experience and feedback from partners such as the UNHCR and Plan International, I see that the psychosocial relief that CWB bring to situations of crisis.

They see CWB as a unique component to a holistic aid package; after housing, medicine and food have been taken care of, we offer emotional relief through laughter.

What are your major roadblocks?

Like many small organisations, we lack core funding and paid part-time and full-time staff. We go from project to project giving as much as we possibly can, but the core team are stretched beyond capacity.

What are CWB’s plans for the future?

We are currently focusing our energy at home, working increasingly with Direct Provision Centres around the country with our Learning Through Laughter workshop programme.

We are running in centres such as Clondalkin Towers with our project called Clown-dalkin. We are rolling out such projects nationwide.

We have plans to work abroad in the not too distant future too, though we feel the need to water the flowers at home first.

As I said, we have many artists and performers on our books but we are greatly in need of professionals such as PR, lawyers, accountants, administrators and graphic designers to help with the organisational capacities of the organisation. One doesn’t need to be a clown to help us spread joy.

You can find more about Ireland’s Clowns Without Borders chapter on their website where you can also donate and find other ways to support them. Further information is on their Facebook page.

Tired of boring party invitations? Well, we have you covered