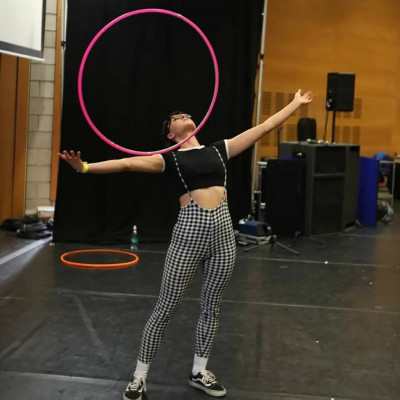 At Hula Headspace, we learn lots of basic hula hoop tricks and lots of tricky sequences you may not have known existed!

Plenty of fun energetic music to bop along to and learn some new moves! The perfect kid's party!

The name Hula Headspace comes from taking your space from the outside world, tuning into your physical body & having some fun!

Sarah is a fully qualified hula hoop instructor and has worked with children her whole career life.
Currently working in a primary school with special needs children.
Experience in doing 6-week workshops throughout primary and senior schools.

"We were looking for a new and innovative activity for our school Active week in June 2022 last, and heard from our neighbouring Junior school colleagues that their children were involved in hula- hooping classes which were proving very popular with the younger pupils. We decided to try it out with our older (8-12 year old) pupils. As a school which plays a lot of different team sports, we thought this might be an interesting departure, one which could cater for children who don’t particularly enjoy team sports, but which from a physical activity point of view would be beneficial to everyone. Sarah came readily prepared with all her own hoops and music, and set up in no time in the hall. She has a wide repertoire of exercises and was able to pitch the moves to be learned perfectly for each class level (3 rd to 6 th class). The pupils were delighted with the sessions. Laughs and fun abounded, yet at the same time, skills of concentration and focus were also called into play to control the hula hoops. Even the most sceptical 6 th class boys got caught up in the hoop ‘tricks’ which they saw as a challenge to overcome. What a great workout it was, but the children hardly noticed that as they very quickly became preoccupied with the different ‘tricks’ and skills which Sarah showed them and coached them to master. A great many pupils… and teachers, when asked what their favourite part of Active Week was, declared the Hula-hooping to be their preferred event and asked if we could take part again!! (Which is something we intend to do!!) We would definitely recommend Sarah’s Hula Headspace workshops!"

The more details we have the better we can help you with your enquiry.