How to Make Slime for a Kid’s Party 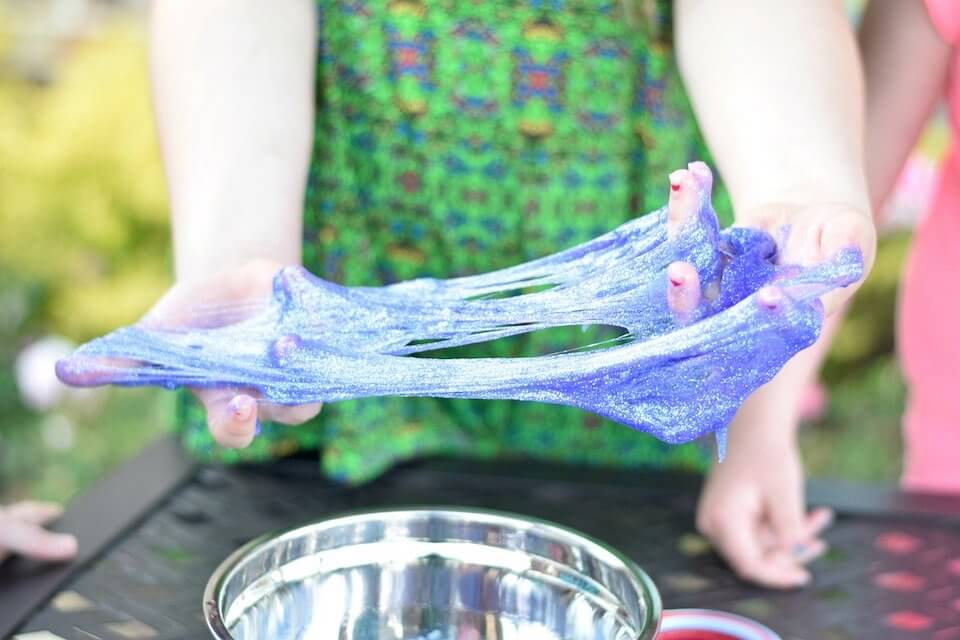 Slime has become a very popular science project for kids to do in school or at home during a party.

If this is something that’s new to you, you’ll find everything you need in this article to make slime at home, the different types of slime and the frequently asked questions about slime.

Slime is a toy made from a gooey, squishy and oozy material that acts both like a solid and a liquid. Kids have fun stretching, splitting and squeezing the material. It’s completely non-toxic and safe to handle.

The appeal comes from the unusual texture. The fact that it’s “gross” to touch makes it fun to play with. Squishing it between fingers is inexplicably satisfying.

The material also acts in an unusual way. Depending on the force that you apply, slime acts like a solid or a liquid which is extremely intriguing for kids.

The history of slime goes back more than a century.  However, the toy was introduced to the market by Mattel Toy Company in 1976. They sold the ready-made slime in a tiny plastic “trash can”. These are used by kids to make “amusing noises” in conjunction with the slime….

How to make slime?

Making slime is a great end-to-end project for kids to do at home. There is something fascinating about seeing basic ingredients magically turn into a new substance.

Once the slime is made, they now have a new temporary toy to play with. Even adults can’t resist touching it.

There are countless ways to make slime. Just like cooking, everyone has their take on the recipe.

Below we’ve detailed a simple recipe that you can then tweak depending on your needs.

Pro-tip: Experiment by adjusting the amount of glue and borax to achieve your desired Slime texture.

While borax isn’t particularly dangerous, you might still want to make borax free slime. It can be a bit trickier to make as borax really helps with the texture of the slime.

However, here is a basic borax-free recipe we use:

Perfecting slime requires a bit of a trial & error. Adjust the recipe as you go to it to make the perfect substance. Play around with the two recipes and you will soon be an expert!

What are the different types of slime?

By tweaking the basic recipe, you can create different types of slime. These will have different textures, different properties and different colours.

We’ve listed some of the most popular variations below.

This is a recipe for slime made with ingredients that can be found in the UK or Ireland. You can find all the information you need in this video by Talisa Tossell.

This isn’t slime that you should eat but rather slime that isn’t dangerous to ingest. Perfect for toddlers and younger kids to play with. You can find three great recipes in this wikiHow article.

This is slime with a slightly fluffier texture, most often achieved by adding shaving cream to the basic recipe. You can find a step-by-step recipe in this article by The Best Ideas For Kids.

4. Glow in the Dark Slime

There are two variations of glow in the dark slime.

The first type glows fluorescent with blacklight (or UV lights). Most often the recipe uses UV reactive face paint. You can find a step-by-step tutorial in this video by Leaning Science is Fun.

The other type glows in the dark by adding glowing powder or glow in the dark blue. You can find a recipe for it on Little Bins For Hands.

Of course, it isn’t but kids find the name catchy. Most often the recipe is the same as glow for glow in the dark slime. Just using vibrant green colouring.

Magnetic slime is perfect for older kids. It combines the fun of slime with the magic of magnets. Magnetic Slime is most often achieved by adding iron powder. You can follow along with this video tutorial by Kiwi Co.

Unsurprisingly this variation is achieved by adding sand to the basic recipe. It looks nice and it changes the texture of the slime. If you want to make some at home, you can follow this quick video tutorial by FimoKawaiiEmotions.

You can find a recipe for Ranbow slime on The Best Ideas For Kids.

As implied by the name, Glitter Slime is just regular slime with glitter added to it.  Just remember, you will be vacuuming glitter for next month… Even with the best precautions, glitter goes everywhere.

Unicorn slime is themed on unicorn colours. It’s identical to rainbow slime but with different colours (Usually blue, gold pink) and glitter. You can find a recipe for it on the Kid’s Activities Blog.

Galaxy Slime is another multicoloured slime with glitter. Most often it’s done with purple, blue and a bit of pink. You can find an easy recipe on the Inscrutables.

Slime specially made to be extra stretchy. It can be 3 to 5 times stretchier than regular slime. Different recipes have different claims which can be hard to verify. You’ll need to experiment and see for yourself.  You can find a recipe for it on The Chaos And The Clutter.

Slushie slime is slime with small slushie beads added to it. These breads change the texture of the slime and make it crunch when stretched. You can find a basic recipe for it here by Cheeksxo3.

Butter Slime doesn’t actually contain butter but the texture is similar to that of butter or playdough. It’s less stretchy than other slime recipes but more mouldable. You can find a recipe for butter slime on The Best Ideas For Kids.

Slime is not dangerous to touch, even when made with borax. However, it’s not edible and should be kept away from small children.

Borax has been classified as non-carcinogenic.

However, some countries, such as the US and Chine, consider that borax isn’t safe to ingest. Notably, the U.S. Food and Drug Administration (FDA) banned borax as a food additive.

In addition, excessive use of borax can be a mild skin irritant (just like baking soda) but it does not penetrate the skin. This means that the repetitive use of borax does not make it more dangerous than a single-use.

If you have any concerns, please consult a medical professional.

How long does slime last?

When played with regularly, slime doesn’t have a long life span. Especially homemade slime. It gets dirty/dusty and slowly stops sticking. After a few days, you’ll most likely need to throw it away.

However, slime itself doesn’t go bad. Over time, it does dry up or go mouldy but it should last for a few weeks depending on the recipe.

How to Store Slime?

To preserve slime and to make it last longer, seal it in a container or a plastic bag and place it in the fridge.

What can you do with slime?

Slime is mostly used for fun and relaxing. It has very few practical uses as it goes mouldy or dries up over time.

Contrary to a lot of viral claims, slime isn’t great for cleaning… Even if you make the perfect recipe, it gets dirty quickly and you’ll most likely loose pieces as you go.

Can you use dish soap to activate slime?

Yes – Some recipes use dish soap and cornstarch to make the slime.

Can you make slime with shampoo?

Yes – Some recipes use shampoo and cornstarch instead of borax.

What is a slime activator?

The slime activator is the ingredient that turns the liquid into the sticky slime substance. Most often the activator is borax but a different one is used for the borax-free recipes.

What is the recommended age for slime?

Every child is different but we usually find that Slime works best for kids who are aged 7 or more.

That’s a wrap, you’re now ready to go out and make your first ever batch of slime! If you’re planning a slime party at home, you can check out our article for some additional planning tips.

If you’ve enjoyed this content, consider subscribing to the newsletter. Get our latest content directly in your inbox.

Hosting a Cooking Party for Kids

5 Reasons Why a Great Birthday Cake is Worth the Effort